PhD Student and other roles.

With regards to the PhD I am doing, it is part of my purist to impart my knowledge and experience to others and contribute to the body of human knowledge.

Poster presentation at the University of Manchester

I presented a poster detailing my work on MEPR and received some interesting feedback from the visiting dignitaries. I was speaking to an academic and I mentioned that it is not uncommon in the archaeological community for papers to be published years after the initial research has been done, i.e. after a dig for example. His reply was that this should not be considered unreasonable, as they have to work on lengthy time-scales. He mentioned a dig in what was effectively in an Arctic wasteland in Scandinavia (the country was named, but I cannot be sure which it was). It took ten years to gain government approval for that dig, hence having waited ten years for permission to dig, taking another one or two to publish the results is not unreasonable. 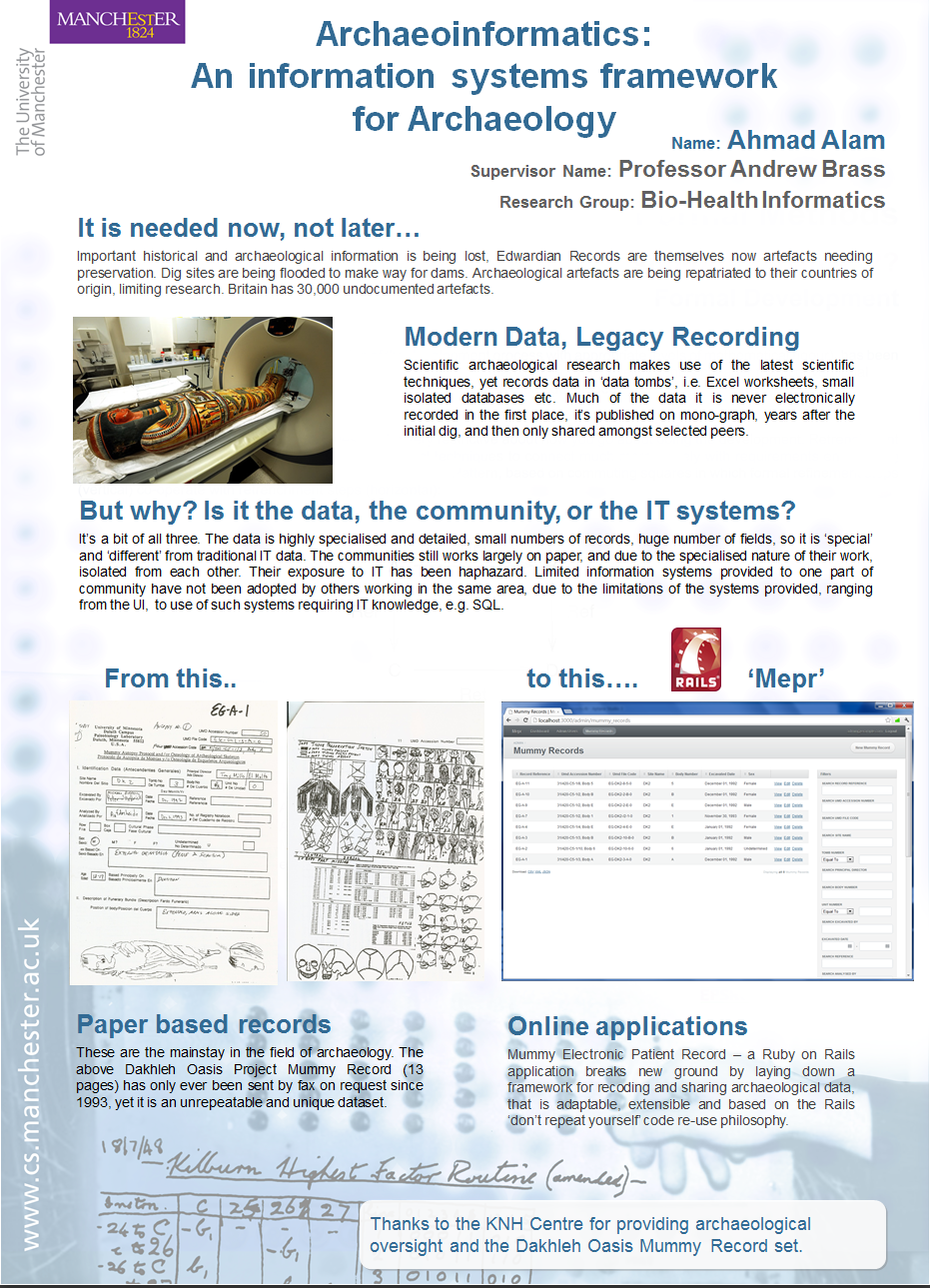 Another interesting point made by an industrial dignitary was that of whether I had looked into the issue of the longevity of electronic media, i.e. optical discs (DVD, CD etc.). My answer was that it has been an issue that I have recorded, particularly where data kept on old floppies discs (5.25", 8" etc.) was lost due to people no longer having the means to read such media. However it was a good reminder to consider the lifespan of optical media, and hence this issue was taken up in my paper, Mummies on Rails.

However the main focus of my research with regards to data handling was more application centric; legacy systems written in obsolete languages, and/or with no source code available. For example I came across an application written in Delphi (an old evolution of Pascal) that had a user interface that one set of archaeologists thought was unusable, but would be very difficult to modify to address their issue with it. Hence they simply chose not to use it.

If you don't know what Pascal is, it was an effective teaching language in the 80's, that lost out to C, (C++ etc.) and Java. I might upset some with my description of it as a 'teaching' language, as it stole a march on the Basic's of that area (the more common predecessors of Visual Basic), but rest assured I knew of its use in industry. Eurostar used it, as did Shell Oil. The latter used it on a VMS pipeline monitoring system, I know this because I worked on it for a number of years.

I own a working USB 3.5" floppy drive, last year I tried to copy my dissertation work off it. Despite being over 15 years old it all worked. Problem is that only the data was on the floppies, I couldn't read the actual dissertation off the CD's I backed it onto as the sessions were never 'closed'. CD's were expensive and I wanted to use the rest of the space at some later date. My modern burner won't read what's there properly, and won't close the session either. However I have a bound copy, and loose leaf printed copy. Last but not least, it's in the university library too.
Posted by Ahmad Alam at 17:30

Ahmad Alam
I am currently alive, unless I have died, in which case no one is likely to update this.